Skip to primary content
The wait is finally over, New Year’s Eve has come, and every sports fan should know that the second College Football Playoff is here. Clemson the 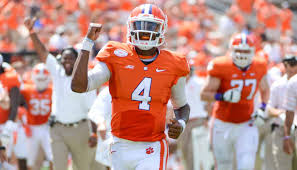 number one team in the country faces off against number four Oklahoma in the Orange Bowl, winner advances to the National Championship. In my opinion this is the better game out of the two semi-finals. We are all going to witness a fantastic quarterback battle, the best we have seen since last year’s Rose Bowl between Marcus Mariota and Jameis Winston. According to the Heisman voters, Deshaun Watson of Clemson, and Baker Mayfield of Oklahoma, are the top two quarterbacks in the country. Clemson has had a dream undefeated season, and completely got rid of that word they all hate, “Clemsoning” I guess the new definition of “Clemsoning” is going undefeated, winning a conference championship, and beating Notre Dame. The Tigers have constantly been the best team in the country.
Ever since Oklahoma’s bad loss to rival Texas, no one has been playing better ball then they have. Baker Mayfield has channeled his inner Johnny Football, and has created magic. Mayfield is one of the most exciting

players to watch, and he always makes something out of nothing. The Sooners are going to have to get their run game going. Sophomore running back, Samaje Perine needs to have a game. Clemson’s defense is the most physical defense the Sooners have faced all year.
I believe that this will be one of the greatest games of the year, but Clemson’s defense will force a crucial turnover late, and Clemson will win the Orange Bowl, and advance to the National Championship.
Prediction: Clemson 43, Oklahoma 42