Today’s Match Up of the Day is the number 2 seeded Michigan Wolverines vs the number 8 seeded Kentucky Wildcats. This is a battle of two blue bloods… last year’s national runner-up vs the young guns. This is Michigan vs Kentucky, who will get the last spot into the Final Four?

The Michigan Wolverines have the most lethal offense in the country. They have so many

great 3-point shooters and they spread out the defense so well. If you give them even an inch of separation they will knock it down. The key player for Michigan is their only senior, center Jordan Morgan. Morgan was unfairly labeled the weak link of this Wolverines team. This postseason he has been the best player for Michigan and he has been playing the tournament of his life. Morgan and his backup Jon Horford are the only true big men on this team and both of them have to contain Kentucky’s star center Julius Randle. Morgan is a great defender, last game vs Tennessee, Morgan shut down the Vols’ star Jarnell Stokes and he drew the game winning charge on Stokes. Morgan has to have a repeat performance if he wants to take his Wolverines to Dallas. Guard Nik Stauskas will score his usual 18 to 20 points, but I think the x-factor of the game for the Wolverines is guard Caris LeVert. LeVert can be the best player on the floor but also Caris and be Careless as shown in their last game when he stepped out of bounds, which gave the Volunteers a chance to win the game. Fortunately Tennessee didn’t take advantage of their opportunity. LeVert has to have a big game if Michigan wants to make their second straight Final Four. 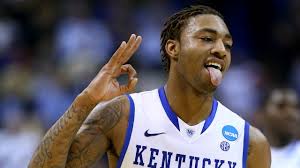 starting five to make the Final Four since ironically Michigan did it with the Fab Five. The x-factor for the Wildcats is guard James Young. Young is their best shooter from the perimeter and he has to make some big shots to keep the defense honest so they don’t just focus on Randle in the paint. Throughout the regular season the Wildcats played like a group of inexperienced freshmen but now they are all playing like a group of five year seniors. Kentucky is playing at a championship level and they will give the Wolverines a run for their money.

I believe that the youth of the Wildcats will finally come to bite them and Michigan’s senior Jordan Morgan is going to save the day once again for the Wolverines. At the end of the day I believe Michigan will be Marching on to Dallas to take on conference rivals Wisconsin in the Final Four. Michigan 79 Kentucky 77