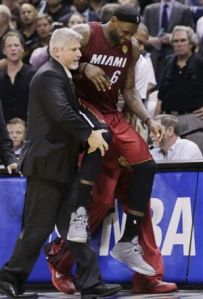 whole Miami team.  Many people say, if Lebron was healthy the Heat would have come out of San Antonio with at least one win.  Myself, I am questioning Lebron’s toughness.  He is being compared to Michael Jordan though he leaves the game because he was cramping, when Jordan played his heart out while suffering the Flu and had his most historic game.  Yet Lebron abandons his team because he was cramping. I don’t think you can compare him to Jordan.  That is enough on ripping one the greatest player in the world, mark my words Lebron James is going to single handily beat the San Antonio Spurs in game two.  Since Lebron James joined the Miami Heat they have never lost a playoff series after losing the first game of the series.

The key to the entire NBA finals for the Champs is Dwyane Wade.  Wade has been unhealthy throughout this entire season, but when the playoffs started up, so did Wade.  Dwyane Wade is the only player on the Heat that the San Antonio Spurs cannot guard.  Wade needs to finish a game.  He started game one on fire, but the he slowly cooled down as the game advanced and in the fourth quarter.  If the Heat want a chance against the best coached team in the NBA he has to show up like he has done in every other series.