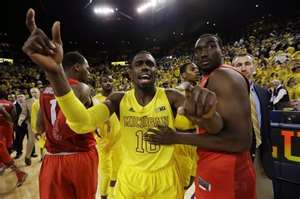 Tuesday night the most historic rivalry in all of sports had written a new page to its many games. Number 10 Ohio State or as people down in Michigan like to call them Ohio at number 3 Michigan. Earlier this year Ohio State gave Michigan their first loss of the season, but this time the Buckeyes had to travel to the home of the Wolverines. With all the emotion on their side Michigan got a lead but they should never get comfortable because this Ohio State vs. Michigan, one of the greatest rivalries in college sports.  The Bucks made a quick run to be up 31 to 30 at half.

It seemed like the boys from the shoe were pulling away with the game, well until NBA legend son Tim Hardaway Jr. had a heat-check hitting six straight three pointers and four in four straight possessions. The Maize and Blue had taken the lead, but with two turnovers Ohio tied it and the game went to over time. That was when the questions began.

Up by one with 20 seconds left Michigan’s Glenn Robinson III was fouled by Ohio State’s Aaron Craft. Craft hit Robinson III over the face which should have been a flagrant which would have given Michigan two shots and the ball but it was called just two shots. Robinson made one but missed the second shot. Aaron Craft sprinted down the court and got blocked on a layup by Tim Hardaway Jr. It looked like Hardaway got some arm but since they didn’t call a flagrant on Craft it was the right call. I like the no call. Michigan won a must win home game and has two tough road tests ahead of them at Michigan State and Wisconsin.

After the game Hardaway said, “ I saw the ball in my face, so I just tried to wrap it up, probably got his arm or something like that, but like I said, it’s up to the refs to call that call, and they let it go.”

The refs called it clean so Aaron Craft said, “There was a bit of contact, but they didn’t call it, so I guess it wasn’t a foul.”

I think that is great sportsmanship by Craft and a good showing of humbleness by Hardaway. The big thing though is Michigan is victorious. GO BLUE 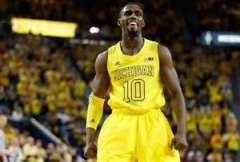