Last night Michigan and Northwestern took the field in Evanston, IL for a classic B1G Ten

battle.  Before the season this game had a lot of hype to it and trust me it lived up to it.  It seems when ever the Cats and the Wolverines meet, it always goes down to the wire.  Luckily for me I was in attendance for this game.  Actually for most of the game it was unluckily for me.  For the the first 3 quarters and more then half of the 4th, this was the most boring football game I have ever seen in my 14 years of being on this earth.  Both defenses dominated in regulation.  The most exciting part most of the game was Northwestern’s special Wounded Warrior uniforms.  This game reminded me of the Alabama vs LSU game a couple years ago or also known as the game of the century.  Both of these games were field goal battles. 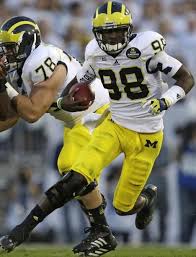 Late in the fourth quarter, it looked like Northwestern had the game won.  With no time outs, Michigan threw the ball into the middle of the field with 12 seconds on the clock.  This is when things got crazy.  You think that the Wolverines would have no time to hike the ball and throw a Hail Mary? They did something even more amazing.  They substituted to get their field goal unit on.  The holder, Drew Dileo, who is also a receiver ran a route on the last play, came sliding in and snapped the ball with 1 second left on the clock.  The ball was snapped and Brandon Gibbons drilled the game tying field goal.  This was just the start of the fire works.  Both teams scored in the first over time and split the second OT with field goals.  Then in the 3rd OT the Wolverines started with the ball.  QB Devin Gardner really took over.  He ran in the game winning touchdown and also 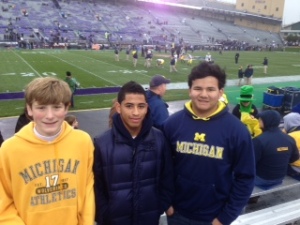 ran in the 2pt conversion.  This game was two teams trying to save their seasons.  Although Michigan needed the win, the Wildcats needed it more.  This loss puts them on a 6 game loosing streak and they are out of bowl contention.  It was a huge win for Michigan yet it was a devastating loss for Northwestern. 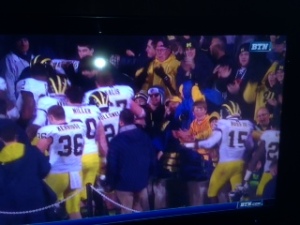 I was at this game and you could see the emotion in the players eyes.  Also all American offensive linemen, Taylor Lewan gave me his game worn glove!