Skip to primary content
Skip to secondary content
The Elite 8 starts today, and I am here to break down the biggest game of the day. The West Regional Championship between  #1 Oregon and #2 Oklahoma is the game you don’t want to miss. Chalk has played out in the West, and the Ducks and the Sooners will face off for a chance to play in the Final Four.
This will be one of the most exciting games we will see all year. These are two of the most explosive offensive teams in the country. Oklahoma’s Buddy Hield is the best player in the country and is most likely the Player of the Year.

Hield and Oklahoma’s other guards will have their points, but the key for Sooners is to get their big men going against Oregon’s tough shot blockers. Ryan Spangler and Khadeem Lattin will have to assert their presence in the paint to make this Oregon defense honest.

Oregon is the most well rounded team in the tournament. They are balanced at every position on the court, and extremely athletic. Sophomore forward Dillion Brooks has been a monster throughout the year and especially in March Madness. His motor is nonstop, and he will burst through the defense straight to the hoop. Brooks has been playing with a chip on his shoulder and now that he faces off against Buddy Hield, he will be very motivated. Oregon is so deep, they have their star Brooks, and you add on the likes of Tyler Dorsey, Chris Bouchier, Elgin Cook, and more. This team is very dangerous.
I think Oregon will over power Oklahoma’s big men, and will be the better coached team today. I am sticking with my championship pick, Oregon.
Prediction: Oregon 96, Oklahoma 92
Advertisement

It has been an uplifting year for the Pac 12 conference after last year’s dreadful season. This season has given the Pac 12  a whole new look so how fitting it is to have the tournament in a brand new place. For the first time ever the Pac 12 tournament is in Sin City. This tournament has been great and the two teams that have made it to the championship will have a chance to rule the west coast. Tonight the UCLA Bruins will face the Oregon Ducks in the Pac 12 Championship.

Game Break Down: This game is going to be neck and neck and will probably go down to the wire. UCLA won last night but they also lost a key player on their team to injury. They had a hard fought win against Arizona to send them into the Championship but on the last play of the game their star Freshman Guard Jordan Adams landed on awkwardly on his foot and ended up breaking his foot. I know how that feels, ouch! Without Adams the Mighty Bruins might not be so mighty.

Oregon has had a remarkable season that nobody was expecting. Oregon was not ranked pre-season and predicted to only make the NIT. Well we all know that’s not going to happen with the Ducks are on the rise blowing everyone away. They started off great until their Freshmen Guard Dominic Artis hurt his foot, but now he is back, and the Ducks are better than ever. They have been playing with heart and exceeding the odds.

Prediction: I believe that the Oregon Ducks will win this game and come out Pac 12 champions. I think this because after Adams injury the Bruins just looked crushed and they are down in the dumps. I think Oregon will win the Pac 12 Championship but this UCLA team is special and come March, they will be dangerous. 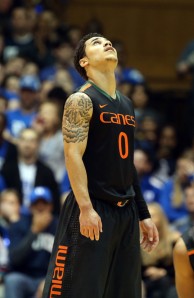 Strengths: Quick guard, deadly from behind the arch, good on ball defender, performs best when the game is on the line.

Weaknesses: Inexperienced, rattled on the road, needs to become more of a leader. When entire team struggles so does Shane.

Analysis: Larkin is a long shot this year but has still performed at an elite level. He is great in prime time and is always the one who steps up to take the big shot. It has been a miracle season for the Hurricanes and Larkin has been the ring leader. I do not think he will win POY but he is my favorite to win it next year.

Weaknesses:  Has to share the spot light with Zeller, inconsistent shooter, tries  to put on a show too much, chokes in big moments, never finishes with the easy lay-up, misses dunks when team needs an easy dunk or lay-up not a mega jam.

Analysis: Oladipo is an outstanding player. He reminds me and many others of a mini Michael Jordan. Victor needs to work on his jump shot and he needs to improve in the fourth quarter. Victor Oladipo is one of my favorites to win the award and he has a great chance of doing so.

Weaknesses: In crunch time rarely passes the ball, tends to struggle on the road and in hostile environments.

Analysis: Burke is one of the best players in the country. He has break away speed and can get past any of the best defenders. Trey Burke literally “steals” the spot light in big moments. Right now I think it is a two man race between Oladipo and Burke. Trey already has a head up against Victor because Burke won Big Ten player of the year. If I had a vote I would vote for Burke. My prediction is that Trey Burke is going to win the Wooden award and become Player Of the Year.

This year six teams in the NCAA Tournament will be wearing new Adidas uniforms. Louisville, Baylor, Cincinnati,  Kansas, UCLA and Notre Dame. I think that these uniforms are very cool and will make the players standout especially in the big moments. The only thing I don’t like is that Baylor’s, UCLA’S, and Louisville’s jerseys are like the NBA Golden State Warriors’  alternate jerseys, they have sleeves. I think that it just looks weird. I am not a traditionalist or anything, I like the flashy uniforms, but sleeves attached to the basketball jersey is odd. They look like soccer jerseys. I am fine with players wearing t-shirts under their jerseys that have sleeves but this new style has taken it too far. Throughout the years of basketball no teams have ever worn jerseys with sleeves attached to them except for Golden State this year and now these three college teams. It looks unnatural. Although I am not too fond of the sleeves I am a fan of Cincinnati, Notre Dame, and Kansas jerseys which are sleeveless and look more professional. All of the teams shorts are the best parts. The design is super cool and they really pop out. I wish my basketball team had cool uniforms like these…what do you think?

Soon both of these ranked teams will move from the Big East to the ACC.  I think Notre Dame won’t be able to handle the competition in the ACC but the talent of the Louisville Cardinals should be able to keep up with the likes of Duke, North Carolina State and Miami.

Game day began at South Bend when the fans rushed the court after a fan made a half-court shot for $75,000.   But that was just the beginning of the fun and games.

Last night the Irish had to tip off against the Louisville Cardinals. The Cards were up big but the luck of the Irish pulled on as they forced over-time. In the first over-time most of both team’s starters fouled out. Each team kept fighting and the game went into double over-time. Still after that, the game was tied so there was a third over-time and at the end of that the score was still knotted up. So…there was a fourth overtime. It was crazy and the game went into a fifth overtime. 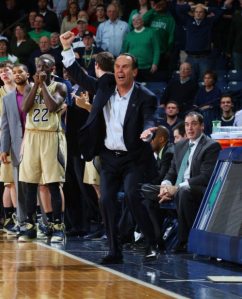 Let’s keep in mind the longest college basketball game was back in 2009 in the Big East tournament when Syracuse beat UConn in a sixth over-time marathon on a buzzer-beater. So, in the fifth overtime the game finally ends as Notre Dame wins the upset.

This was tied with the second longest game in college basketball history, and the longest regular season in Big East history. The last 4 of the 5 well actually now 5 of 6 games these two teams have played each other it has gone into overtime. During all of those five overtimes the players must have been exhausted and most of the starters fouled out. Both benches came out strong but there was one center named Garrick Sherman on the Irish who hasn’t played much at all but came up big and kept them in the game scoring 17 points. If Sherman didn’t play like that Notre Dame would have gotten destroyed, but he delivered.

Louisville really blew it, they had so many chances to win that game and they never showed up in prime time. A couple weeks ago Louisville was at the top of the pack and was ranked number one in the country and went on a huge loosing streak that they recently broke. It looks as though they have  just started another one. The Cardinals went from studs to duds. It’s just a shame to see all of their talent and watch them loose and loose, but this is a rough season with all the top teams getting upset. This is why I love college basketball.

Oh and when speaking of luck, the Irish had nothing compared to the Wisconsin Badgers this weekend who had to pull out their own $75,000 shot to beat Michigan.

There were many upsets the past week in college basketball. Duke got annihilated by Miami, Louisville went on a three game loosing streak, Arizona lost to the Bruins of UCLA, and Syracuse went down to Villanova. The only two teams in the top five that won all of their games last week were #2 Michigan and #3 Kansas. Who is going to be number one? Rock, Chalk, Jay-hawk or is it the Maize and Blue?

There is no way that the Michigan Wolverines will be ranked lower then number one. Michigan has the most talented team and in my opinion they are the best coached team. Although Kansas has played well this year Michigan was the number two team and Kansas was number three last week. Michigan also has the best backcourt in the nation,Trey Burke and Tim Hardaway Jr. Right now Michigan is almost unstoppable.